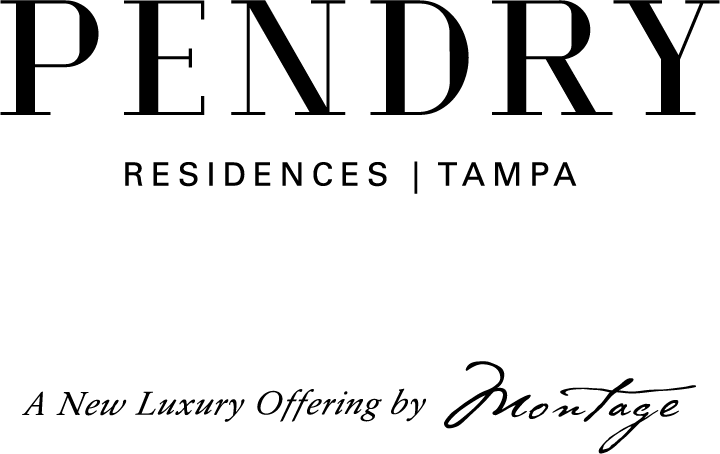 Posted at 08:48h in Lifestyle by Pendry Residences

Imagine living in a stylish, modern condo with a concierge at your fingertips 24/7, a waterfront view out your high-rise window and a high-end spa, pool and restaurants inside your building.

A new, elevated way of life is making its Tampa debut with units planned to open this month. Known as hotel-branded residences, the next level of luxury and hospitality is coming to those seeking a more prestigious address. While the concept has flourished for decades in major cities around the world, now is Tampa’s time to add the upscale offering to its mix, providing the most coveted amenities and services. Four hotel-branded residences have been announced in Tampa, two of which are opening this spring in Water Street Tampa, with two others coming in 2024 along Bayshore Boulevard and Tampa Riverwalk.

First to market was Tampa EDITION in 2018 at 1000 Water St. in Water Street Tampa, the $3.5 billion downtown-waterfront mixed-use development. EDITION is a Marriott-partnered, five-star hotel from hospitality veteran Ian Schrager located in several major cities across the world, and one of only three locations to include residences with the hotel.

“This was a no-brainer and a natural fit,” says Lee Schaffler, chief portfolio officer for Strategic Property Partners (SPP), the developer of Water Street Tampa. “It’s a novel idea and a great operating model that has been done successfully in other cities.” A rendering of a condo’s living and dining room is shown at The Residences at Tampa EDITION. (Courtesy of Strategic Property Partners)

Touting exclusivity, just 37 condominiums in The Residences at The Tampa EDITION top 172 hotel rooms, and prices start at $2 million. Construction and reservations began in 2019 with plans to open this March or April.

“The answer has been a resounding ‘yes’ — that this is something Tampa wants and needs,” Schaffler says. “There is an appetite for this type of product. The market rose to meet us.”

SPP started pre-sales quietly and sold between a third and half the units before going public. As of January, 34 condos were spoken for and only three remained, starting at $3.8 million. The buyers tend to be executives seeking a primary or secondary home, over half of which already live in Tampa Bay.

The white-glove lifestyle will include a rooftop pool, spa, social kitchen and lounge with a private balcony, 24/7 front desk and concierge, full-time lifestyle manager, seven high-end bar and restaurant offerings and a residents-only fitness center, lobby, drive, valet and elevators, as well as worldwide access to EDITIONs with perks. Designed by Morris Adjmi Architects with interiors by design firm Roman and Williams, the condos include premium finishes and appliances, private wraparound terraces, 10-foot ceilings and floor-to-ceiling windows offering coveted views of Hillsborough Bay and Downtown Tampa.

This rendering gives a look inside a Pendry Tampa condo, including an open concept living and dining area and floor-to-ceiling glass walls to maximize the view along the Tampa Riverwalk. (Courtesy of Pendry Tampa)

A similar project of note is The Ritz-Carlton Residences Tampa along Bayshore Boulevard, offering condos under its hotel brand but without hotel rooms. Miami developer Related Group opened The Ritz’s sales gallery in October 2021, and construction began in January with an opening expected in 2024. The project will include 170 condos and 12 townhouses in two towers, with pricing between $1.6 million and $5.1 million. It already pre-sold over 85% of the units as of January.

Bryan Pascual was quick to buy a condo at Tampa’s Ritz and EDITION. The finance professional sees it as a smart investment that will only increase in value. Pascual spent most of his life in Tampa before moving to Puerto Rico five years ago. His appreciation for The Ritz brand came from living in The Dorado Beach Ritz-Carlton, where he and his fiance fell in love with the hotel-branded residence lifestyle. As for the EDITION, it became his favorite hotel when traveling to New York, Los Angeles and Miami for work; his confidence in the brand was so strong that he signed on without seeing renderings. With Pascual’s family living in Tampa, he plans to stay in his Tampa condos when he visits them, and otherwise get paid to let the hotels rent them out.

“I’m a branded residence guy,” Pascual says. “The problem with most luxury buildings is their management moves to a different job and the homeowners association doesn’t upkeep the building and it falls apart in a way, whereas the branded residences have a duty and obligation to always upkeep that level of prestigiousness and top level of service.”

Pascual relies on The Ritz for a laundry list of daily tasks, including meal delivery, stocking his fridge, cleaning his home, delivering his mail, washing his car, landscaping and valet parking. He also loves the convenience of dining at fine establishments and entertaining his friends at the pool and bars just an elevator ride away — “all under one roof.”

“I can’t get enough of it,” Pascual says. “It really makes it easy for someone who has to travel and has business to live a luxury lifestyle and not have to give up anything. Once people in Tampa find out, everybody’s going to be fighting for a unit. This is going to be the who’s who and the ultimate place to be. What better way to live it up?” Here is a look at how a Tampa EDITION condo’s luxurious bathroom may appear. (Courtesy of Strategic Property Partners)

Tampa EDITION’s success caught the eye of other hotel brands, and a handful approached South Florida-based Two Roads Real Estate Group to express interest in its nearby property at 100 S. Ashley Drive. Two Roads had been sitting on this prime real estate at the center of the Tampa Riverwalk for several years and cycled through many iterations of plans, the latest being solely residential.

With hotels clamoring at the door to bring Tampa’s next branded residences, and with EDITION’s early success selling units, Two Roads made the leap. It announced in November 2021 that Pendry Hotels & Resorts, a new luxury hospitality brand from Montage International, will offer 207 condos, starting in the $900,000s, atop 220 hotel rooms. A sales center opened in January, and Pendry Tampa is planned to be move-in ready in 2024.

“We’d been closely watching the EDITION,” says Reid Boren, managing partner of Two Roads Real Estate Group. “Branded residences are all over Miami and are prevalent in other states, and I think Tampa was just catching up. It’s been very, very well received.”

Pendry Tampa’s amenities include 24/7 access to the spa, room service, housekeeping and concierge. The hotel also takes care of residents’ condos when they travel and provides exclusive offers at other properties. There will be a restaurant, bar and lounge, as well as a rooftop pool and lounge, a kids club and a fitness center. Floor-to-ceiling windows and private terraces will showcase expansive views of the water. Residents have their own lobby, elevator, dedicated staff and rooftop pool and lounge.

“The owners of the Montage/Pendry brand really understand service,” Boren says. “They know how to learn about their customers and retain them. They know your drink, they have dog toys and kids things behind the desk. They know what kind of ice cream your kid likes from the last time they were there.” A rendering of an Asher apartment is depicted. (Courtesy of Strategic Property Partners)

Tampa’s latest hotel-branded residences announcement came in December 2021, also from Water Street Tampa, but this one differs in several ways. Asher, the neighborhood’s newest apartment tower at 1050 Water St., will include ROOST Apartment Hotel, a high-end, boutique extended-stay concept from Philadelphia-based Method Co., already in many major U.S. cities. Pre-leasing at Asher began in January with move-ins slated for March, and ROOST Tampa plans to open in spring. Pricing starts at $1,575 per month for a studio apartment in Asher.

“Tampa EDITION and Asher have an extremely different customer base and business model, but very similar ethos in that design, fashion, culture and arts is prioritized,” Schaffler says.

Randall Cook, CEO and co-founder of ROOST Apartment Hotel, offered his perspective on the trend.

“There’s this convergence of hospitality and residential that you can see around the country,” Cook says. “People are continuing to expect more out of a high-end residential experience on quality of design, services and offerings. We see Tampa as one of the unique growth markets in the U.S.” “The ROOST parent company, Method, is deeply, deeply versed in the hospitality industry,” Schaffler says. “It’s going to feel like a fancy resort, and this is your home. It will be a wonderful, curated lifestyle. Everything is at your fingertips. There’s nothing out of the question to ask for help with.”

“With Tampa being one of the most vibrant cities in the southeast, Pendry won’t be the last, for sure,” Boren says.

“We’re far from the point of market saturation,” Cook says. “Anyone in the market for a condo and who is considering the hotel-style amenities and lifestyle, it’s a needle in the haystack, and there’s plenty of room and certainly demand for this type of model.”

After all, who wouldn’t want to experience the latest luxury living in Tampa?

“At a hotel, you are pampered from the time you walk in the front door until your luggage is loaded and you head on your way, and the same should be true of your daily life,” Schaffler says. “If we can make things less stressful and chaotic, we should avail of that 365 days a year.”

We use cookies on our website to give you the most relevant experience by remembering your preferences and repeat visits. By clicking “Accept All”, you consent to the use of ALL the cookies. However, you may visit "Cookie Settings" to provide a controlled consent.
Cookie SettingsAccept All
Manage consent

This website uses cookies to improve your experience while you navigate through the website. Out of these, the cookies that are categorized as necessary are stored on your browser as they are essential for the working of basic functionalities of the website. We also use third-party cookies that help us analyze and understand how you use this website. These cookies will be stored in your browser only with your consent. You also have the option to opt-out of these cookies. But opting out of some of these cookies may affect your browsing experience.
Necessary Always Enabled
Necessary cookies are absolutely essential for the website to function properly. These cookies ensure basic functionalities and security features of the website, anonymously.
Functional
Functional cookies help to perform certain functionalities like sharing the content of the website on social media platforms, collect feedbacks, and other third-party features.
Performance
Performance cookies are used to understand and analyze the key performance indexes of the website which helps in delivering a better user experience for the visitors.
Analytics
Analytical cookies are used to understand how visitors interact with the website. These cookies help provide information on metrics the number of visitors, bounce rate, traffic source, etc.
Advertisement
Advertisement cookies are used to provide visitors with relevant ads and marketing campaigns. These cookies track visitors across websites and collect information to provide customized ads.
Others
Other uncategorized cookies are those that are being analyzed and have not been classified into a category as yet.
SAVE & ACCEPT